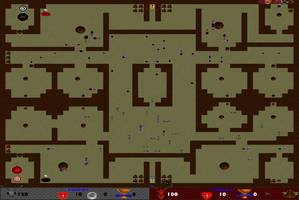 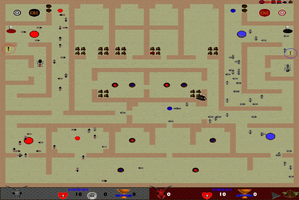 The weather really has turned cold here in northern Alberta and with so much time inside it didn't take long before we started playing A-mazing Ants 2 player games on the smart TV. My girls have really grown since the original A-mazing Ants game that I started 10 long years ago. My youngest was only a few months old when I started the game on good old Game Maker 8.

My youngest prefers playing the black ants using the wireless keyboard so her sister was using the Xbox wireless controller. After a few nights of playing though it was apparent that the black ant player was winning a much higher percentage of games. The ability to use  poison and drop it by the red queen ant a cool feature in single player upset the balance of the game to much in 2 player.

Another issue seemed to be the ants seemed to move more to the right side of the maze thus giving the player on the right a slight disadvantage if they unable to remove enemy launchers early before the maze fills up with ants. So I added a few more mazes to the game to balance the starting ratio.

And the girls wanted some new mazes to play and why not so I added some more mazes to keep things interesting. A-mazing Ants hasn't really caught on but continues to be our favorite game in our household. So for the few folks that have a copy here's a balance update for you.